Does the estate have its own will? Dwelling upon the last will. by Agnieszka Kilian

In a world proliferating in riches and injustice, there seems, for the moment anyhow, little relief in the notion of generations. For Nietzsche the contract was a ‘memory of the will’, but there are other modes of control of future distribution of goods. The question here, for Agnieszka Kilian, with the last will, is who or what bequeaths, and what actually is the bequest?

His mother had sent him, with enough to cover his expenses, to Havre to see an uncle, from whom she had expectations of his receiving an inheritance. […]
-Well?
The old man had received him in a very cordial manner, but without disclosing his intentions. Madame Moreau sighed.

The main protagonist of Sentimental Education, Frederic Moreau, finally receives a legacy. The inheritance, which is supposed to facilitate fulfilment of his desires and aspirations: Firstly, the founding of a newspaper in order to have influence on social changes, and then, apparently, the desire to fulfil his love for Madame Arnoux, a lady seen in passing on the way home.

Frederic’s volatility, aspirations and defeats are observed against the backdrop of France during the 1848 Revolution and its collapse. The changing will or peculiar inertia of young Moreau seems to be the axis of this generational novel. However, the question of the inheritance and the will itself seems to be one of the most compelling narratives. Not only from the standpoint of Mrs. Moreau, who wanted a legacy for her son so desperately, but also from the perspective of the desires and the inclination of the estate itself. Might not the German language indeed prefigure some convergence between the will and the estate, in the way the word ‘vermögen’ means at once ‘ability’ and ‘asset’?

The last will, or inheritance more broadly, is a special figure because it is based on a paradox: it owes its existence to non-existence. It exceeds the strict boundaries between something alive [and with a viable associated agency] and something dead [and retrospectively its passivity]. Reaching beyond the moment of one’s own agency, the last will shapes situations exactly at the moment when it [the will] no longer exists. One may say that inheritance is a kind of ‘afterlife of death’, which poses as living thanks to the transmission or rather its continuous form – the transmission from which the vitality beats. In his book, ‘Erbfälle’ Stefan Willer points to an interesting etymological kinship in German, which might have an impact on the nature of the ‘last will’. According to the author, ‘to inherit’ [erben] is derived from ‘to acquire’ [erwerben], and although they mean something else, they are closely related, even if initially on the basis of opposites. Because how can you acquire something that just falls into someone’s hands, without any action? Acquiring always involves effort, making a choice, and perhaps also some austerity. However, as Jacob and Wilhelm Grimm’s dictionary suggests, the etymology of the word heir [erbe] has its roots in [arbeit], which is evident in the prefix arb. The Grimms see a common element in a certain semantic relationship between work/activity and inheritance, but also in a certain historical analogy: the future heir, just like the employee, stands insubordination/passivity. The inheritor is indebted for dedication and work; his father’s will become his will. In this case, coming into inheritance is tantamount to a transition, a ritual – an arbi niman, that in gothic means transferring the will. It is also remarkable how the heir [erbe] sounds similar to the word herr. But looking at the etymology of the word erben and the element of effort it seemingly contains, one may ask:  Who does this work and for whose benefit in the modern times?

The visual arts can come in handy, as they are wont to capture accurately the unutterable. Looking at images like Carl Johann Spielter’s “Reading the Will”, we are struck by a special doubled temporality: past and present, which in that moment endure in their opposition, creating some other order. In that painting we see a group of people, gathered around the table, looking at each other. One of them is holding a piece of paper, the will. They altogether create a kind of here-and-now situation. But there is something more: collected objects and portraits surrounding the people and creating some type of structure. The legitimacy of the inheritance seems to come not so much from a piece of will paper, but from the structure that these items identify: Japanese vases, Flemish landscapes, and finally portraits of ancestors, or just predecessors. Even if the estate leaves the family, it always finds successors, who are also well-dressed and worthy of immortalisation in the portraits. This ‘second plan’, a plexus of things and people, of accumulated property and symbolic capital seems to be a real source of empowerment. Something tells us that there is a pattern in it, and the people gathered around the table, will, after some time, dissolve into the background to become merely the medium, and increase the number of portraits, if not in this, in another room. This moment had its predecessors and will have successors. There is also some other ambiguity: A will written in a lifetime is not effective; it gains its power first after death. It places the transfer in the sphere of active-passive, in which the transfer itself is not only the result of action, of free will. It also comes from leaving a certain status quo, an invariability that requires, in a way, this passive aspect: the duration of the estate, its concept.

After receiving news of the inheritance, young Frederic is stunned: A yearly income of twenty-seven thousand livres! And he was overwhelmed with frantic joy at the idea of seeing Madame Arnoux once more. With the vividness of a hallucination he saw himself beside her, at her house, bringing her some present in silver paper, while at the door stood a tilbury –no, a brougham rather! -a black brougham, with a servant in brown livery. He could hear his horse pawing the ground and the noise of the curb-chain mingling with the rippling sound of their kisses. And every day this was renewed indefinitely. He would receive them in his own house: the dining-room would be furnished in red leather; the boudoir in yellow silk; sofas everywhere! And such in a variety of whatnots, china vases and carpets! These images came in so tumultuous a fashion into his mind that he felt his head turning round.

This description turns to an amazing circulation of things: and not only was a whole universe of objects created, but also a certain lifestyle. Paying the visit to Madame Arnoux seems to be only an attendant accessory –staffage, if you like –  for the operation of the new carriage, and for the rituals like presenting gifts, wrapped in silver paper –it all turns into a symbolic surplus. Frederic fantasizes, and even if he doesn’t own the asset, it already performs for him. The asset not only drives the protagonist’s imagination, it drives the whole reality around. This procession of things, their eternal life in this exchange, acquisition and presentation is an impulse that seems irresistible.

In his book ‘Capital in the Twenty-First Century’, Thomas Piketty meticulously describes how an inheritance has become a key form of capitalism development. The drive to transfer a property is not only strong, but moreover such the transition is not particularly difficult, considering the rate of return. It is true that one could imagine a world in which everyone would decide to transform all their assets into a lifetime annuity so that they die without leaving any inheritance. However, there are such instruments like an inverted mortgage, but it was conceptualized for the people in critical financial situation, whose real estate was the only source of income. And although the asset is not transferred to the descendent, it still follows the logic of accumulation of wealth; with the difference being that the financial institutions replace the human heirs. Now from the point of view of assets, it doesn’t change anything. In that “economy beyond time” [Jeneseitsökonomie] generations are just one of the tools, but still very significant. Until the end of the 18th century this ‘economy beyond time’ was defined by the principle of primogeniture, which meant that the real estate was transferred exclusively to the oldest male member of the family. As this principle didn’t allow for sale or division of the estate either, it leads to unprecedented hyper-accumulation over generations. In this sense, inheritance should be read not only as an economic stream, but as a social force that strengthens the non-egalitarian social system.

The testament itself known as ‘the last will’ comes to the fore quite late, originally just to facilitate the transfer of wealth to the church. As the ‘last will’ slowly freed itself from this context, it became a strong player in the development of new phases of capitalism. The ‘last will’ at its heart serves as a particular carrier to support the circulation of goods, but certain attitudes related to future ownership.  And even the very fact of being an heir in the future became a capital itself, and thus obliged a fueling of some forms of ‘silver paper’ economics.

The proposition to abolish inheritance appeared during the French Revolution and later on became one of the propositions of the Communist Manifesto. Literature of that time evidences how highly discussed this issue was. The issue of inheritance was never so strongly exposed as during the realist era. Flaubert captures this spirit in his Sentimental Education. The scene in the Intellect Club is notable for this. Frederic, wanting to put forward his candidacy for parliament, listens to the assembly, which calls successively for the overthrow of academies, academic titles, and inheritance. This tally is in that context extremely significant and shows how similar are our feelings at once for heritage and inheritance. We don’t know what Frederic wanted to say. He left the assembly after trying to take the floor without success.

As we know from Piketty’s calculations, France during the ancient regime continued only its long march towards unrestrained accumulation and definitely strengthened the desires of ‘silver paper’: circulating gifts freed from all first necessity. With little taxation, structurally the situation stays unchangeable, adapting only to new forms of economics. And it is difficult not to link these events with the codifications of inheritance law, which on the one hand abolishes the entails and introduces the principle of “autonomy of the individual”, but on the other does not change anything, or rather reveal the tacit nature of the inheritance.  The ‘last will’ reflects only the desires of its object: the fortune.    Yet Frederic did not receive his inheritance from his uncle in his last will. The notification Frederic receives runs thus: Monsieur Moreau, your uncle, having died intestate. And it seems that Flaubert ‘quotes’ this note verbatim for a very good reason. There is no will, uncle’s wish or effort. Frederic’s relative could simply refrain from doing anything just in order to act: to transfer the property.  The statutory template, under which the property was transferred, acted on its own, by virtue of law. This automatism reveals the tacit nature of ‘the last will’. The last will only reflects the desire of its object, the circulation. And it doesn’t matter whether the assets will be kept in these or other hands. The only thing that does matter is the silver paper to wrap the gifts. 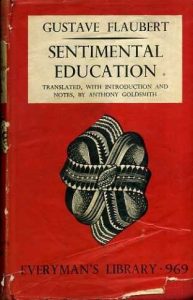